I was having afternoon tea with my family on Saturday when I reminded them that a certain important President’s birthday was honored on this day. We all raised our teacups to Thomas Jefferson, born on April 13th, 1743 . He holds a special place in my heart for reasons that are known to many.  I don’t need to bore you with a retelling of his intellectual genius and pursuits, his skill as a writer and in languages, his ability and passion as an architect, his love of France, his complex political ideology, and the continuing controversy over his views and actions where slavery is concerned. I recommend excellent books by Joseph J. Ellis (American Sphinx: The Character of Thomas Jefferson, Founding Brothers: The Revolutionary Generation), his own collected writings, and The Adams-Jefferson Letters, which contains the complete correspondence between TJ and John and Abigail Adams (I stopped just short of calling them The Adams Family. Aren’t you proud of me?) for further study on this complex, passionate, and remarkable man.

Let’s talk about wine instead.

One might argue that never was there a greater — and more fraught — love affair than between Thomas Jefferson and wine. TJ has been called America’s “first distinguished viticulturist,” and “the greatest patron of wine and wine growing that this country has yet had” and I love him all the more for it. He traveled extensively to various wine regions in France and Germany (particularly the areas of Rhone, Bordeaux, Languedoc, Provence, and the Rhine and Mosel Valleys) where he further indulged his love for good food and wine. There’s even an Emmy-award winning movie, The Cultivated Life, about Jefferson and his wine endeavors.

Whenever I can on my way back from my Alma mater in Charlottesville, I pop by Barboursville Vineyards for a wine tasting and tour. The estate house was designed by Jefferson, one of only three residences that he designed for his friends, and their signature wine, Octagon, bears his design. Their knowledge of wine, and indeed of Jefferson and his wine-making and cultivating, is second-to-none; I could stop and listen all day to their knowledgeable experts. It was on one of these tours that I learned of Jefferson’s numerous attempts to cultivate old-vine European wines in VA to no success.

In 1774, he established two vineyards at Monticello in partnership with Philip Mazzei (who had originally traveled to work with Adams to establish the first commercial vineyard near Adams’ home in  Augusta County…until TJ stole the guy from him and convinced Mazzei to establish said vineyard adjacent to Monticello instead. Oops? Sorry, not sorry, BFF?) but was ultimately thwarted in success thanks to a nasty little bug called phylloxera, a type of louse, that destroyed most of the vines and had been responsible in the past for destroying most of the vines in Europe and bringing wine production to its knees. It was only through grafting and hybridization that wine survived and without the American rootstock, there would be no Vitis vinifera (or common grape-vine) wine in Europe today! So, thanks, TJ, for your failures; they might have proved the salvation of the wine industry to this day.  Unfortunately, Jefferson and Mazzei’s vineyards were never able to produce a drinkable wine in the 1700’s due to complications with climate, mildew, phylloxera, etc.; even so, Jefferson’s fascination and experimentation with viticulture is documented up until 3 years prior to his death. Today, Jefferson Vineyards produces between 4,000 and 8,000 cases annually. 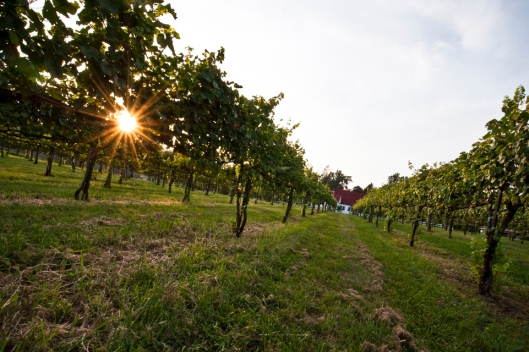 In addition to his efforts at viticulture, he was also famous for having spent a hefty percentage of his income on wine. According to this brilliant post, Jefferson spent approximately “$3,200 per year on wine during his first term, which equates to roughly 13% of his annual salary.” Over the course of his lifetime, “Jefferson spent the equivalent of roughly $300,000 in today’s dollars on wine during his eight years at President.” Can we raise a glass to a man who has his priorities straight?

For an incredibly in-depth overview of Jefferson and his love of wine, I recommend reading John Hailman’s Thomas Jefferson on Wine and checking out this excellent series of posts from the wine blog Drink What You Like, which explores Jefferson’s involvement with wine in 30 posts in 30 days. Salud, dear Readers!

5 thoughts on “Thomas Jefferson – A Toast”