Exactly one month ago, the world became a much sadder place. Harold Ramis died at the age of 69, leaving us an incredible legacy of brilliant comedies and film-making. It is a virtual guarantee that something this man has written, produced, or directed made you laugh in this lifetime: SCTV, Stripes, Animal House, Caddyshack, National Lampoon’s Vacation (and anything Clark Griswold, since he advised Chevy Chase on how the role should be played), Ghostbusters, Groundhog Day, Analyze This, and the list goes on.

If you couldn’t tell by this wicked great blog Katherine and I have going on here, I’ve been something of a geek my whole life. I downright worshipped this sardonic braniac when I was a kid and saw in him all the intellectual, knowledge-seeking, sarcastic joke-cracking, marshmallow-destroying glory I sought in life (I will always nurse a wicked crush on Egon Spengler. Definitely the hottest Ghostbuster). To say that his death hit me hard would be something of an understatement. No, I never met the guy, but he was a big part of my childhood and was taken from us way too soon.

As for the tenuous connection of Harold Ramis to anything Victorian, here’s a hilarious poster for a 19th century/Steampunk version of the Ghostbusters.

Yes, indeed. I’d watch a series all about these spectral eliminators. You know the song is in your head right now.

Godspeed, GrandDude. Thank you for all the laughs, past, present, and future. You gave us a lot of happiness; so we got that going for us, which is nice.

Meet Pinkabsinthe and her amazing steampunk, gotchic jewelry, clothing, and textile work. A Russian artist currently living in Poland, her clothing and jewelry features an astonishing attention to detail, color, and intricacy of form.

I love all of these collars.

YOU GUYS IT’S A SKULL CAMEO EYE PATCH DO YOU UNDERSTAND.

It appears that not all of the gorgeous pieces on her deviantArt are available for purchase, so it if you find something you like, it might be worth shooting her a message on her Etsy page (she specifically requests that you use Etsy conversation for any questions or enquiries). Here’s her deviantArt website and her Etsy site.

Yeah, so I want all of this.

I stumbled across an Etsy shop the other day that I wanted to share.  The shop is called “Ms. Purdy’s Hats.”  Ms. Purdy has a lovely collection of attention-getting Victorian-style hats, from the broad-brimmed types you might see on Audrey Hepburn in “My Fair Lady” to the cheeky mini-top hats popular among Steampunks.  They’re all gorgeous, but here are a few of my favorites. 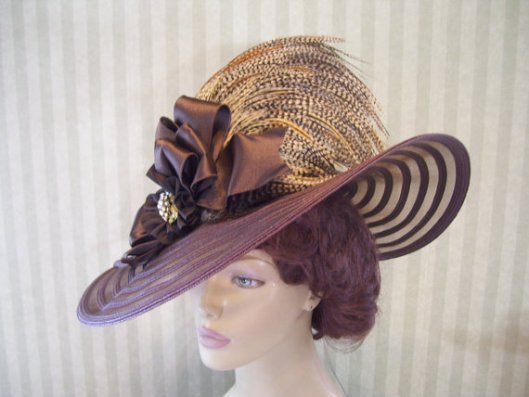 Thankfully I do live in a state where I could potentially find a horse-race-centric use for a spectacular hat like this.

I love the color of this one. 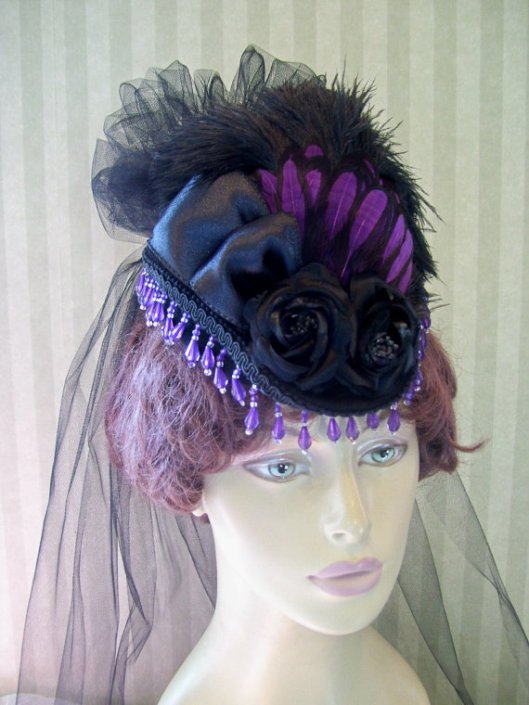 This is a great “Rachel McAdams as Irene Adler” hat.

This photo doesn’t do justice to this hat – the other views better show the variation of color in the feathers and other details.

Perfect for tea parties or Downton Abbey dress up!

(Sigh) Have we discussed how much I wish people still wore hats?  I think we have.  Anyway, check out Ms. Purdy!

Ultimately, this post is an excuse to celebrate Star Trek period, but thanks to some clever work by deviantArtist Rabittooth, we can do it Victorian-style. These images made the rounds of the Internet earlier this year but seeing as Katherine and I got to enjoy Star Trek Into Benedict Cumberbatch this weekend, it seemed more than appropriate to show them off again. The dear Captain above is dashing as always.

Logical that he’d be a scientist.

Bones, you always bring the healing.

“I CANNA HOLD HER TOGETHER CAP’N! I DINNA HAVE THE STEAMPOWER!11”

I now want a short 30 second movie of Chekov and Sulu attempting to ride these bikes. License to print money. You’re welcome, Paramount.

Just for kicks, here’s our Benny in a top hat. Because we can.

Did anyone get to enjoy Star Trek this weekend? Thoughts?

Ladies and Gentlemen, I’d like to introduce you to a wonderful band pioneered by a extremely talented friend of mine: The Extraordinary Contraptions.  From their own website, “A lawman, a time traveler, a gentleman explorer and a mad genius join forces… To alter the sound of steampunk as we know it! The Extraordinary Contraptions, Atlanta, Georgia’s own steampunk rock band combines superb musicianship with visuals from a time that never was. The rock-and-roll aesthetic meets the steampunk DIY ethic to produce a unique sound and visual sensation.”

I plan to do further posts and hopefully feature in-depth interviews with Professor von Stadberg himself here in the near future. They’re extremely talented musicians and their take on all things musical and Victorian/steampunk is truly fascinating and inspired. Until then, here’s their new video for everyone’s enjoyment: